Before & After: Five Kitchen Remodelling Ideas

Get inspired to give your kitchen a makeover by taking a look at these before and after photos of amazing kitchen renovations.

Why You Need to Makeover Your Kitchen

The kitchen is one of the most regularly used rooms in your home, and also a big selling point of a house. However most kitchens are at risk of looking dated and are in serious need of modernization. If you’re considering giving your kitchen makeover, get inspired with our collection of before and after photos of successful kitchen renovations. The photos showcase a variety of styles that you can try and prove that any kitchen can be transformed into something amazing.

This kitchen had a lot of oakwood incorporated into the design which made the room look really bland and very old fashioned. This was accompanied by a lack of light colors which gave the kitchen a dull and dingy appearance which was not very inviting. 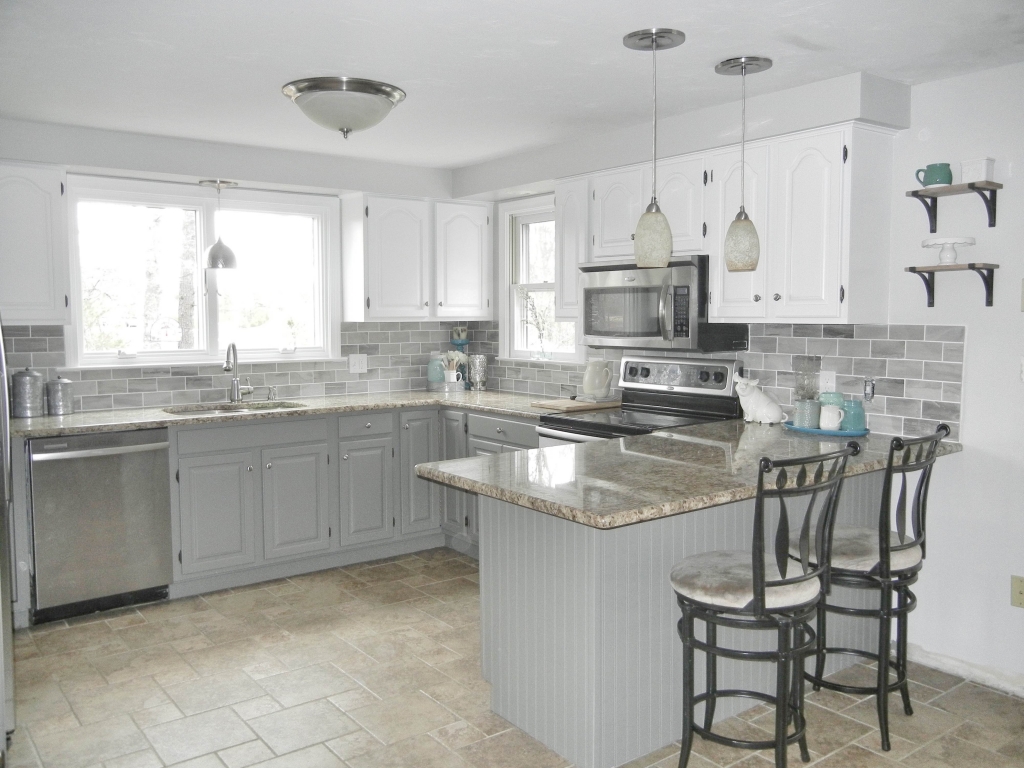 The kitchen was transformed into a brighter and more welcoming room thanks to a full repaint. Despite the oak overload, the cupboards remained as they were good quality and it wasn't worth scrapping them. Instead they were given a makeover with a lick of paint. The top cupboards were covered in a couple of coats of Dove White, while the bottom ones were painted Chelsea Grey to create a subtle two tone design. This saved a lot of money compared to buying brand new cupboards of similar or lesser quality. If you are thinking of painting your cupboards it's best to use a high quality paint such as Benjamin Moore. There are a range of colors you can purchase to suit any kitchen style, so you won't be limited on choice. To match the grey cupboards, the walls were painted a similar shade, and backsplash tiles were added above the worktops. For the finishing touches matching grey kitchen canisters and a mason cookie jar were put on display on the worktops, and a couple of teal accessories were added to give a pop of bright color. 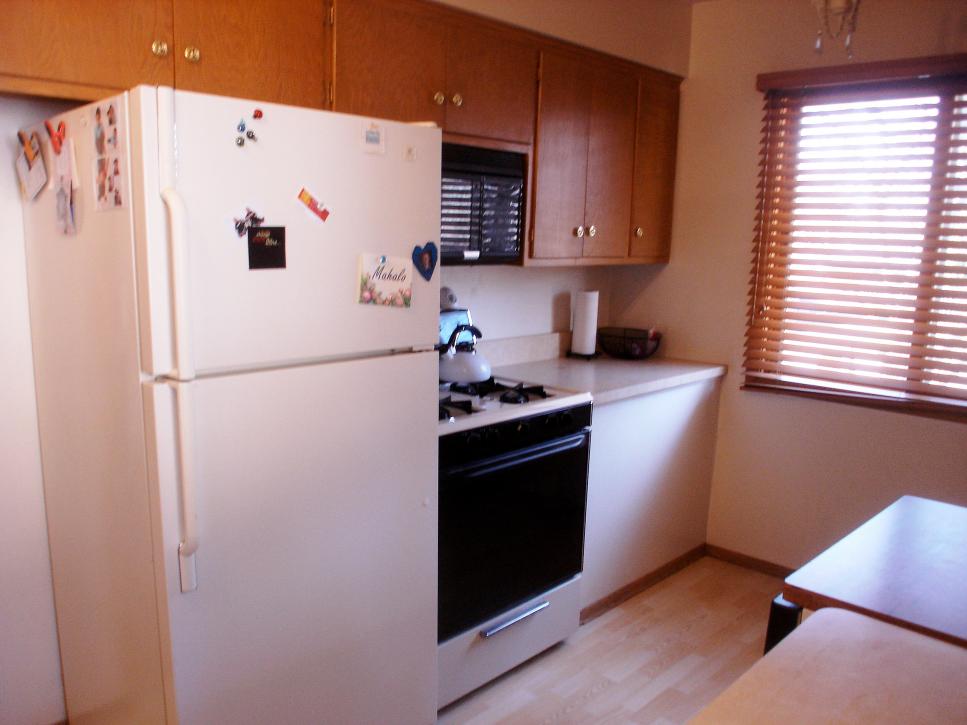 This kitchen was so plain and outdated that it was in desperate need of a makeover. The overall beige color was vey drab, and made the kitchen look like it was devoid of character. The cupboards were also boring and basic, while the countertops had a very clinical appearance. 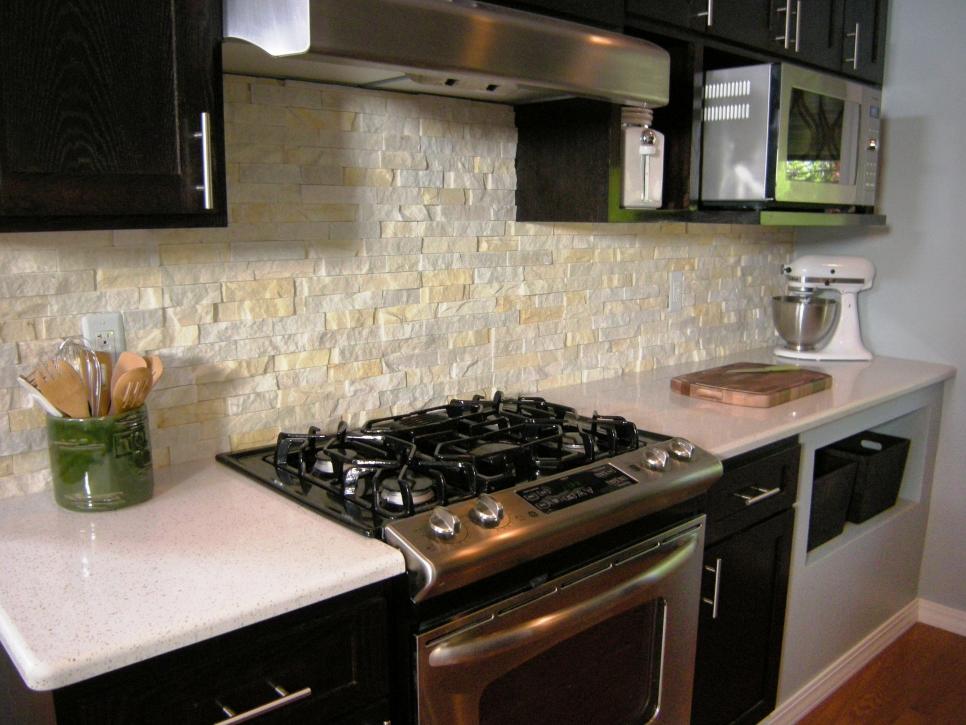 The kitchen was modernized with sleek black cupboards to create a more stylish look. The countertops were also replaced with a beautiful quartz design to complement the cupboards. Quartz is a brilliant material to use for countertops as it lasts for several years and will always look elegant regardless of how old it is. So there is no risk of it being viewed as outdated. The backsplash for this kitchen is made out of stacked stone panels, which are surprisingly reasonably priced but look very expensive. This makes it good a investment if you want to create a luxury high end kitchen without the hefty price tag. 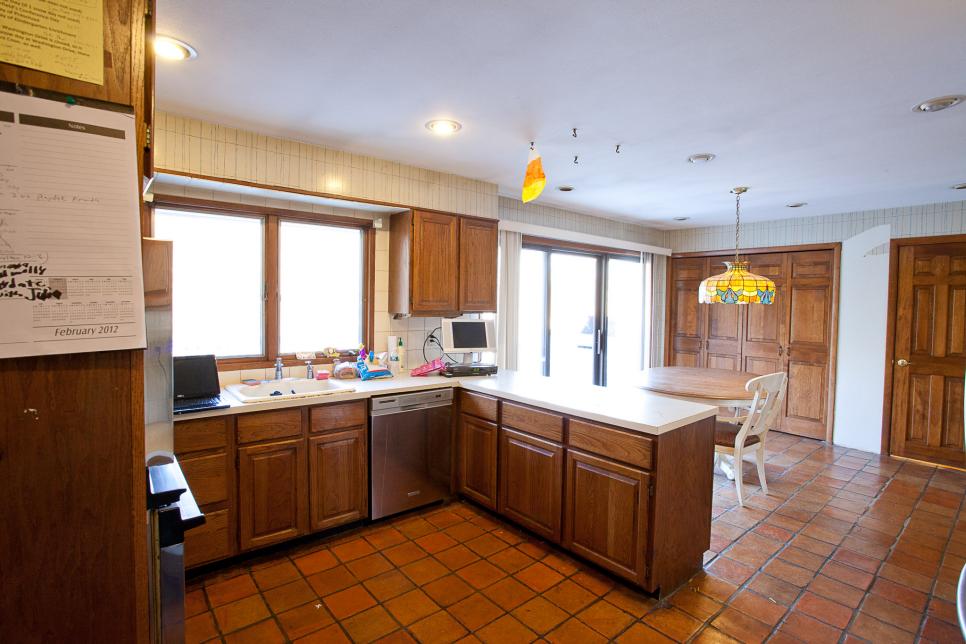 Despite being a good sized kitchen, the dark color of the cupboards and flooring makes this room appear small and gloomy. The light above the main kitchen area is not particularly appealing, while the shade around the other light is very old fashioned and gaudy. There is also unnecessary clutter and  computer equipment on the worktops which looks very out of place and should be stored elsewhere. 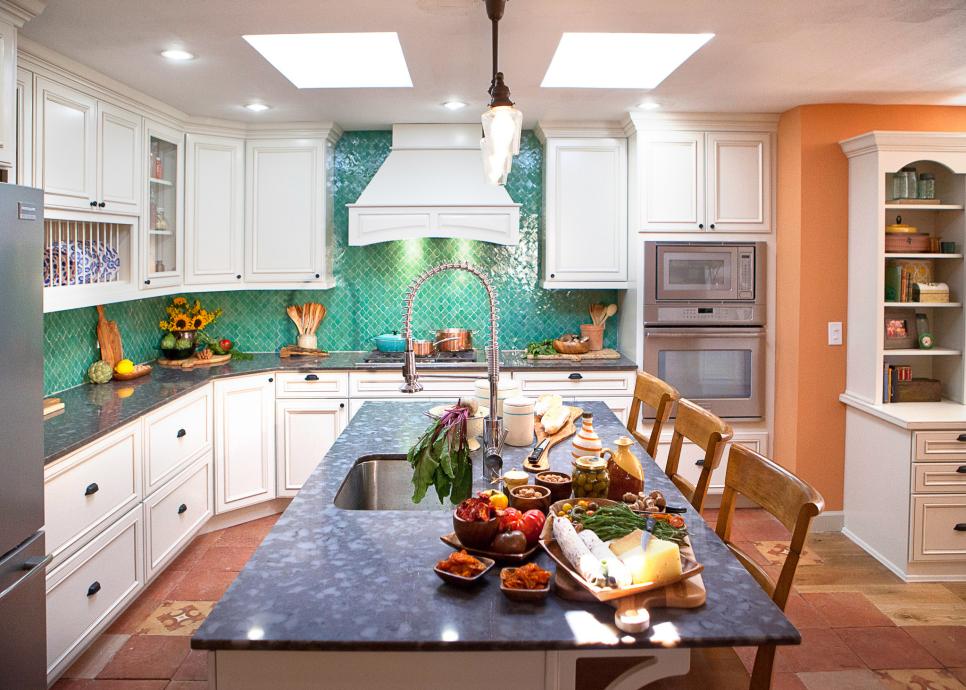 Find out how: hgtv

A green backsplash was applied to the walls to inject some sorely needed color to this kitchen. New white cabinets with black knobs were also installed to add a subtle contrast to the walls. The clutter was cleared off the counter tops, which had been replaced with a sleek grey color, and handy kitchen utensils took their place. New hanging lights were installed which accentuated the brightness of the kitchen, and new flooring was installed which was of a lighter color than the original floor tiles. To complete the look and functionality of this kitchen, a center island with three chairs was added so all of the family can enjoy casual meals there. 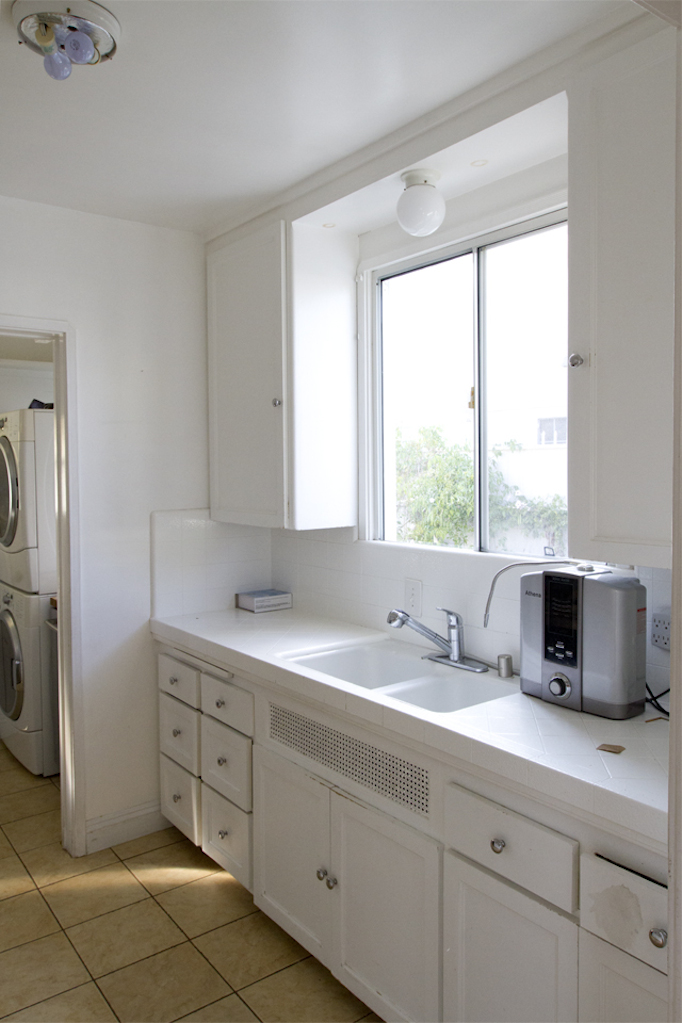 This kitchen was quite small and cramped, and the large amount of white made it very bland looking. There was no color whatsoever in this kitchen apart from the flooring, which was just a basic floor tile design. There also wasn't a proper light fitting in the middle of the ceiling, so bulbs were left exposed, which gave the kitchen an unfinished appearance. 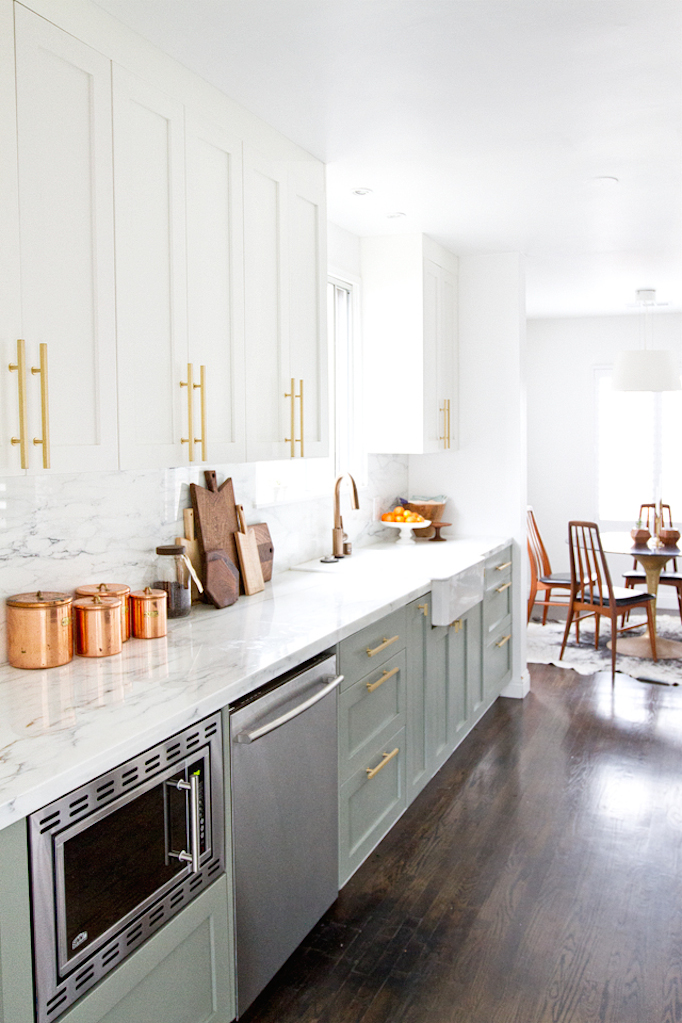 The kitchen was expanded by having a wall knocked down. You may not be able to do this in your own home, but if you have a small kitchen it's worth considering expanding it in some way or another. The bottom cupboards were replaced with a more modern style and spray painted with 'Pigeon', a feathery blue color from the Farrow and Ball collection. To complement this color, brass hardware and marble counters were installed into the kitchen. The top cupboards remained, but they also had their handles replaced with a brass version, so they would match the rest of the kitchen. 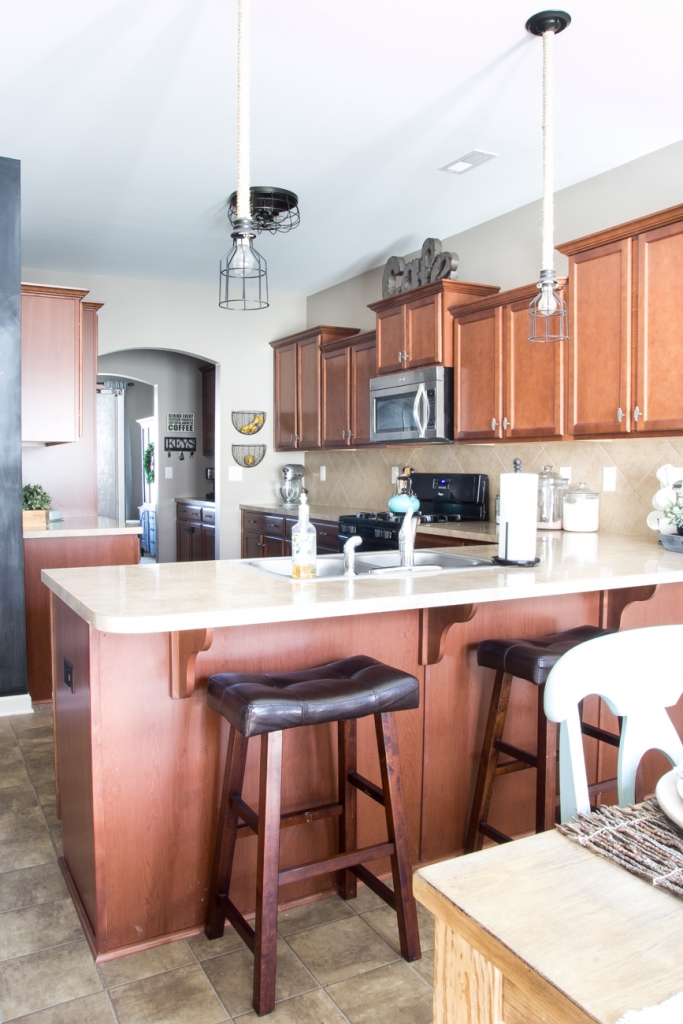 The kitchen featured a lot of red undertones and dark wooden cabinets that made the room feel dark and uninviting. There was also beige countertops and a beige backsplash which were very plain and made the kitchen look very boring and uninspiring. 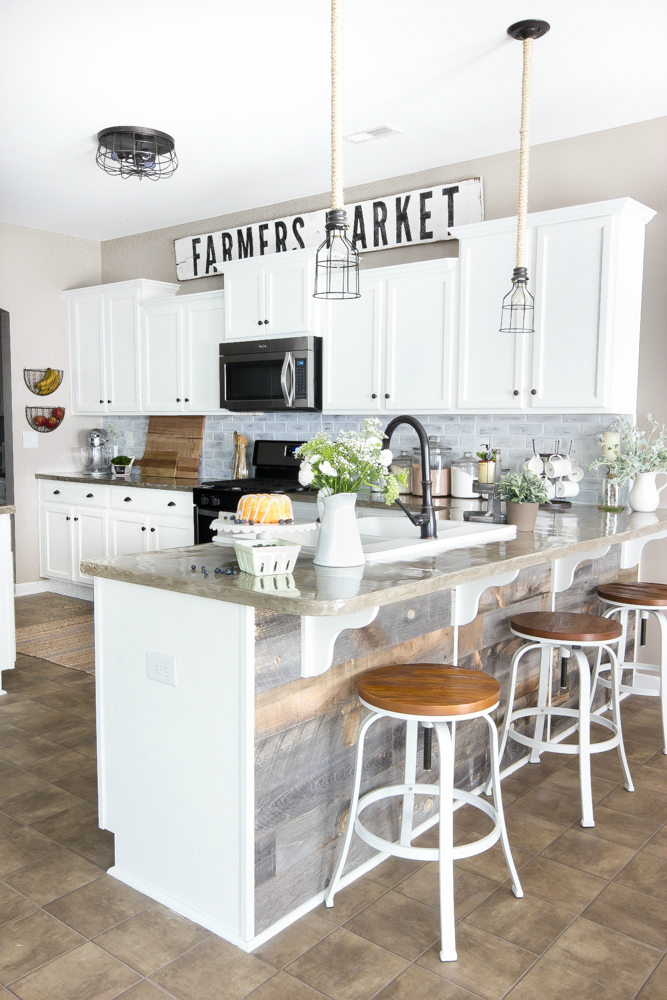 The kitchen didn't have any windows, so the cupboards were painted white to add some brightness to the room, and the handles replaced with sleek black ones. The beige countertops were covered in a thin layer of concrete and sealed to create a grey design that complemented the color of the cupboards. The beige backsplash was also changed to a white washed brick paneling that blended seamlessly between the cupboards and countertops. The flooring remained the same but a rug was added as a budget friendly alternative to completely overhauling the floor. New stools were also bought to match the modern design of the countertops. 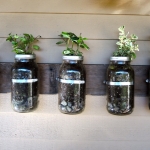