Explore This Tatters-Turned-Picturesque Fixed Up Farmhouse

This farmhouse from the 1800s was in serious need of a makeover, but that didn't stop someone from buying it off Craigslist. With a lot of time and effort, this rundown house was renovated into a beautiful family home. Take a look at the before and after pictures of each room and be amazed at the transformation. 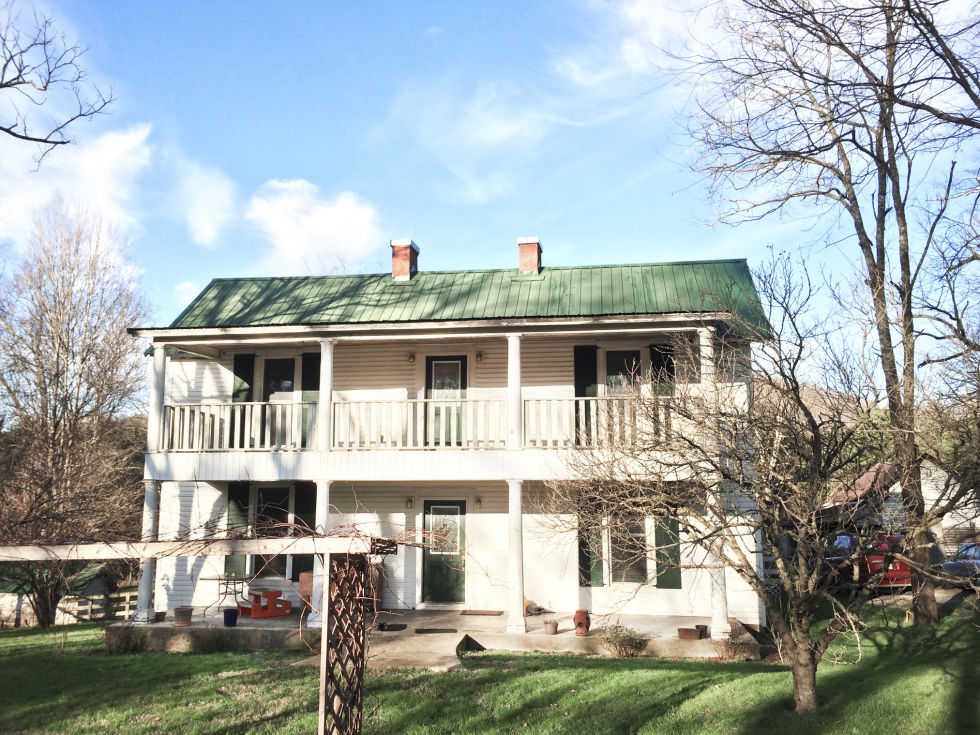 With it's bland and dingy siding and an unkempt yard, the outside of this farmhouse was very uninspiring and unappealing. The only redeeming feature was the spectacular double porch, which was in desperate need of a repaint and some seating so it could be utilized properly. 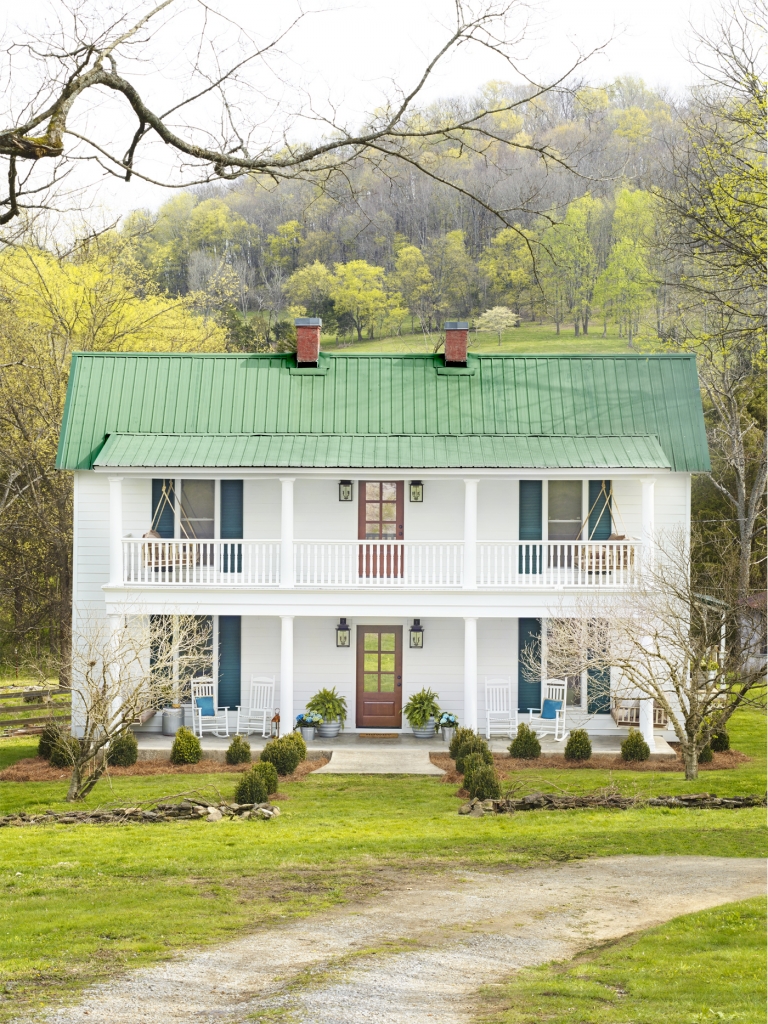 The area around the house was properly landscaped to boost the farmhouse's curb appeal. Seating was maximized on the double porch, with a cosy pair of swings and four pretty white rocking chairs. To dress up the seating areas, patterned throw pillows were added, and planters and shrubs were placed around the front of the house.  To refresh the exterior, new upper porch spindles were installed, and the tired looking door was replaced with a deep mahogany version to add warmth to the outside of the house.

The entryway is the first part of the house people see when they enter, so it needs to be inviting. However the original interior did not offer a warm welcome. Plain white walls and a rundown staircase contributed to the drab and unpleasant look of the entrance area. There was nothing visually appealing about this part of the house, and it was screaming out for some color. 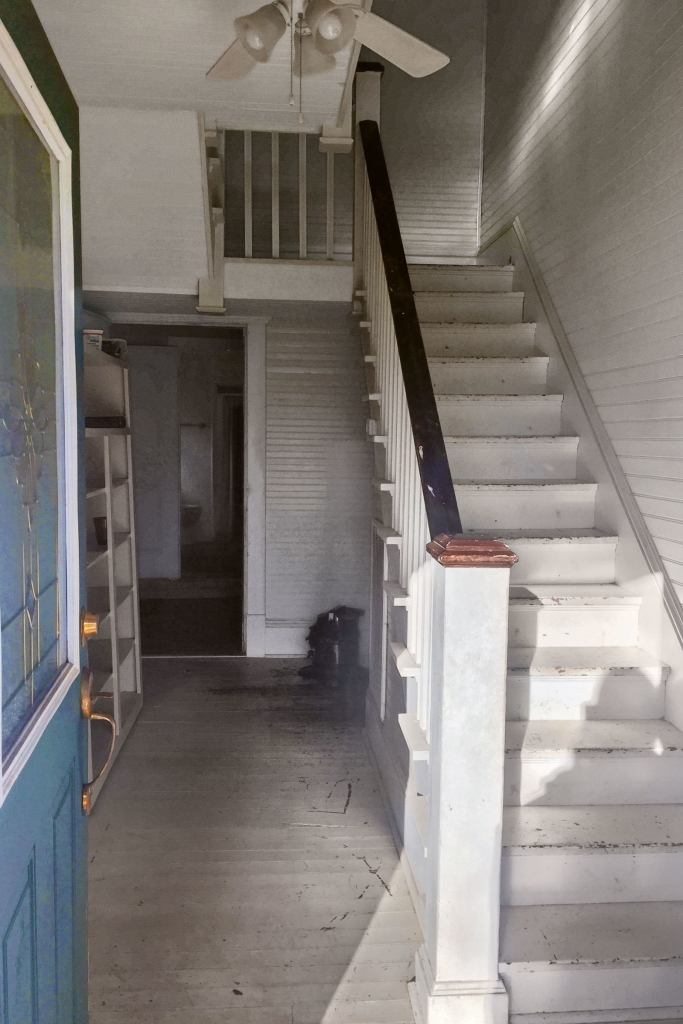 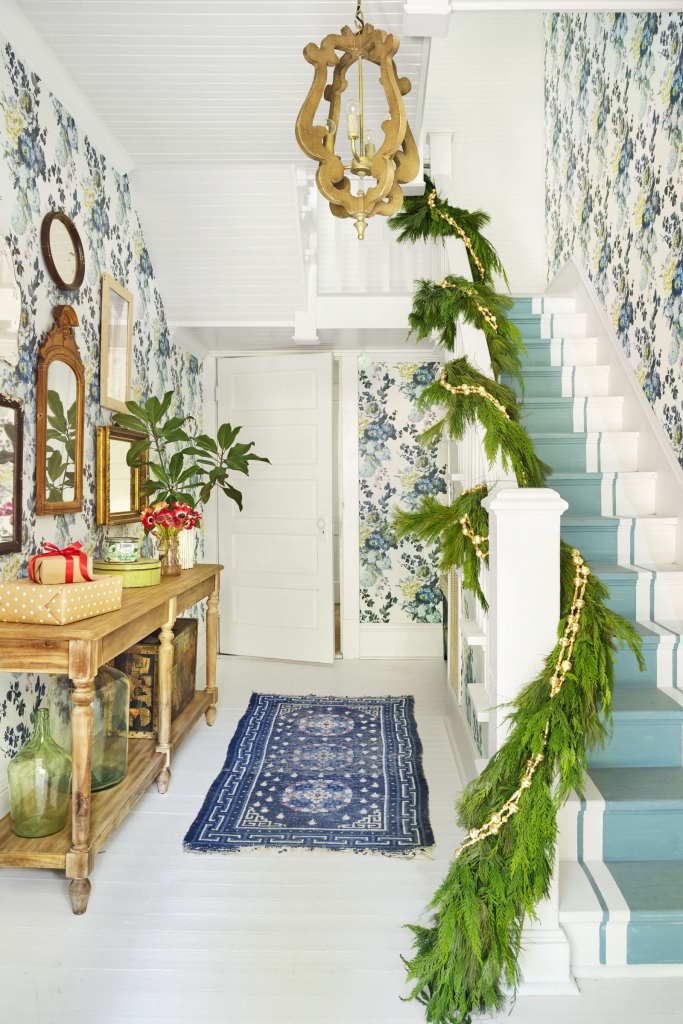 Walls were given a much needed lick of white paint before a beautiful floral covering was applied to brighten up the room and add some playful shades of color. A rug matching the blue on the walls was laid down on the floor, and a complimentary stair runner was painted in a light pastel blue. The entryway was already a generous size but to make it appear more spacious, a large selection of mirrors were hung up on the wall. 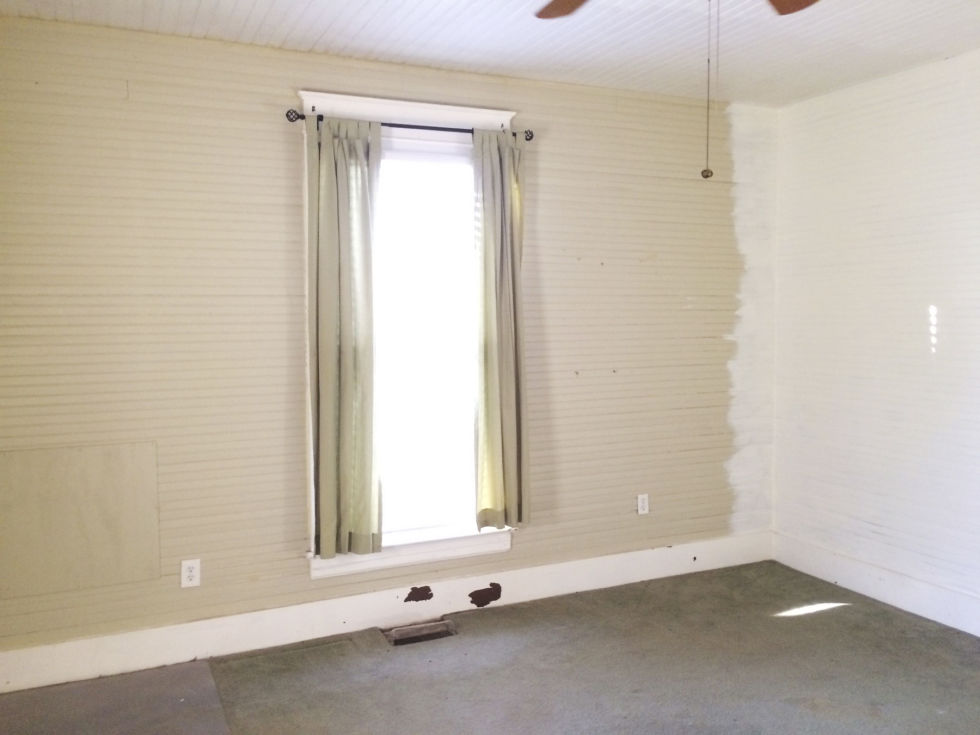 There wasn't much wrong with this bedroom apart from the original beadboard ceiling and walls needing a lick of paint. Old pine floors were hidden underneath the carpet but were in need of costly restoration, so it was decided that they would be painted instead. 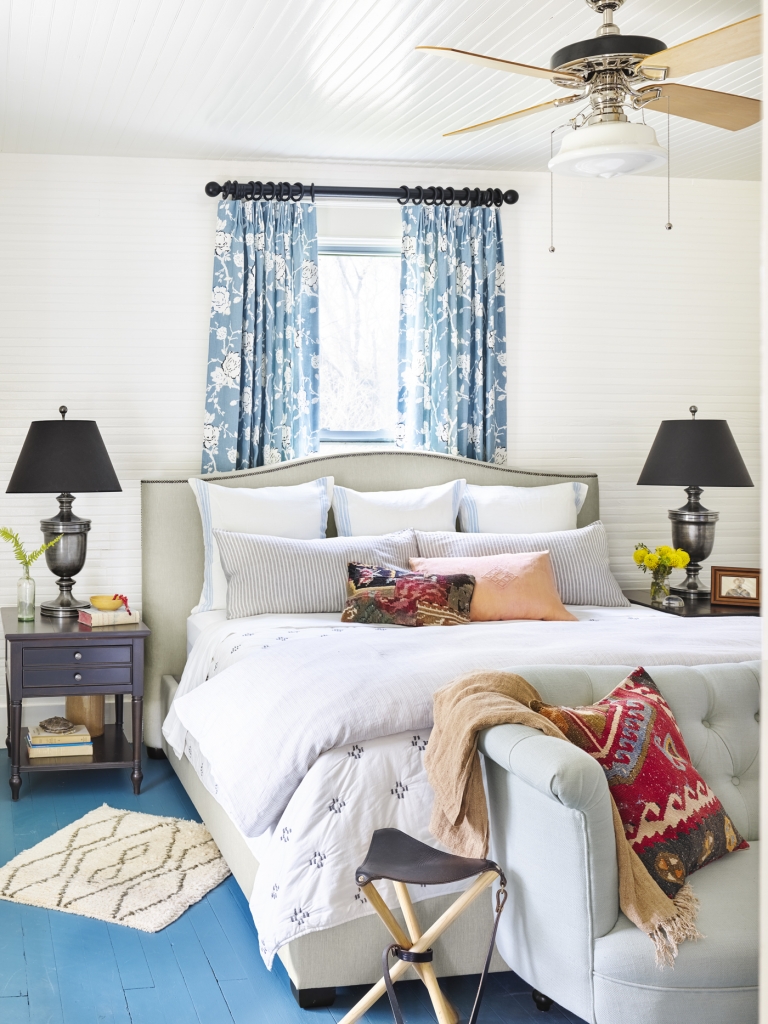 A gorgeous dreamy blue was painted on the floor of the bedroom to give a pop of color, and complimentary blue draperies with a bold white print were hung up in front of the window. To make the most of the space, a double bed was placed underneath the window. Matching bedside tables with nickel bedside lamps were placed either side of it to create symmetry in the room. An elegant ceiling fan was installed above the bed, while a tufted linen settee completed the focal point of the room. 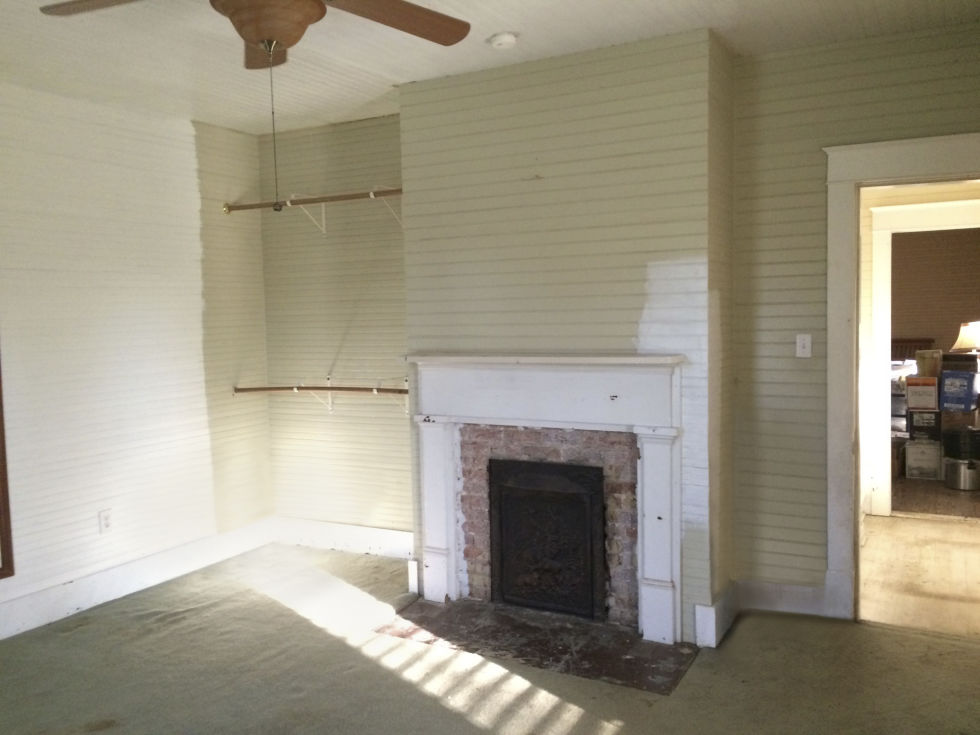 On the other side of the bedroom there was a storage area for clothes instead of a closet, and an old unattractive fireplace. Worn down dirty carpet covered the floor and hid the house's original hardwood flooring. To make matters worse, the color of the walls wasn't very inviting and gave the room a dull and dreary appearance. 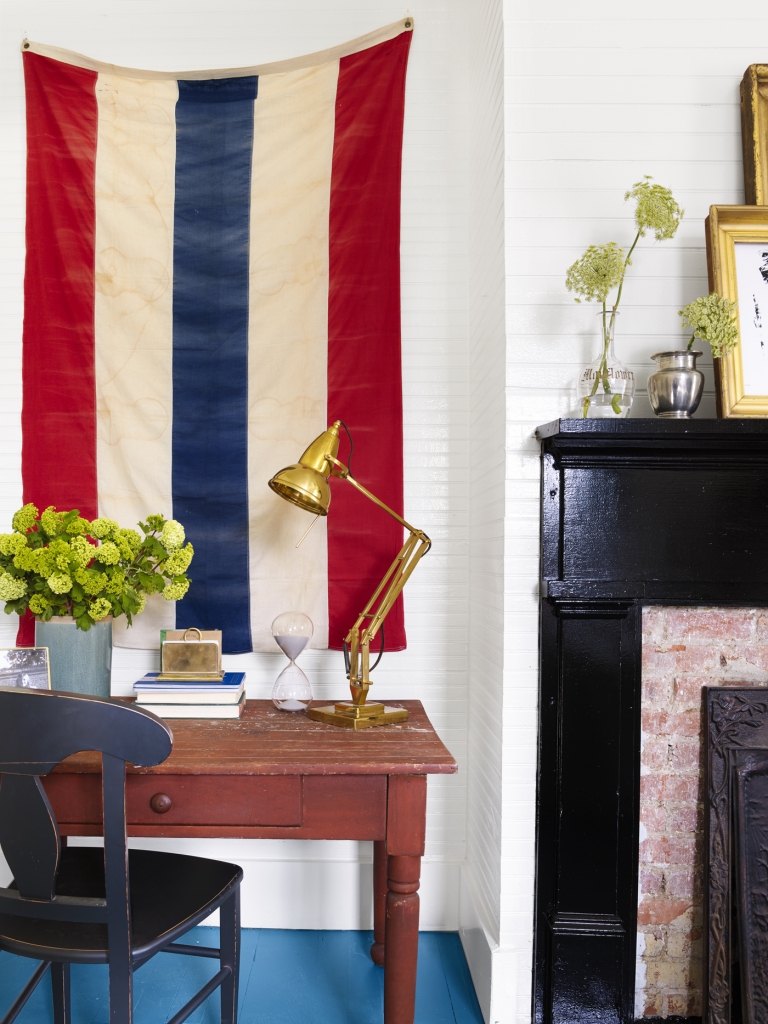 The hanging rod for clothes was taken away, and it was replaced by a pretty wooden desk and chair to create a writing nook in the corner. Beautiful flowers and a personal photograph were placed on the desk to make it feel more homely. A gold lamp was also added to ensure whoever sat at the desk had enough light so they could easily focus on their work. 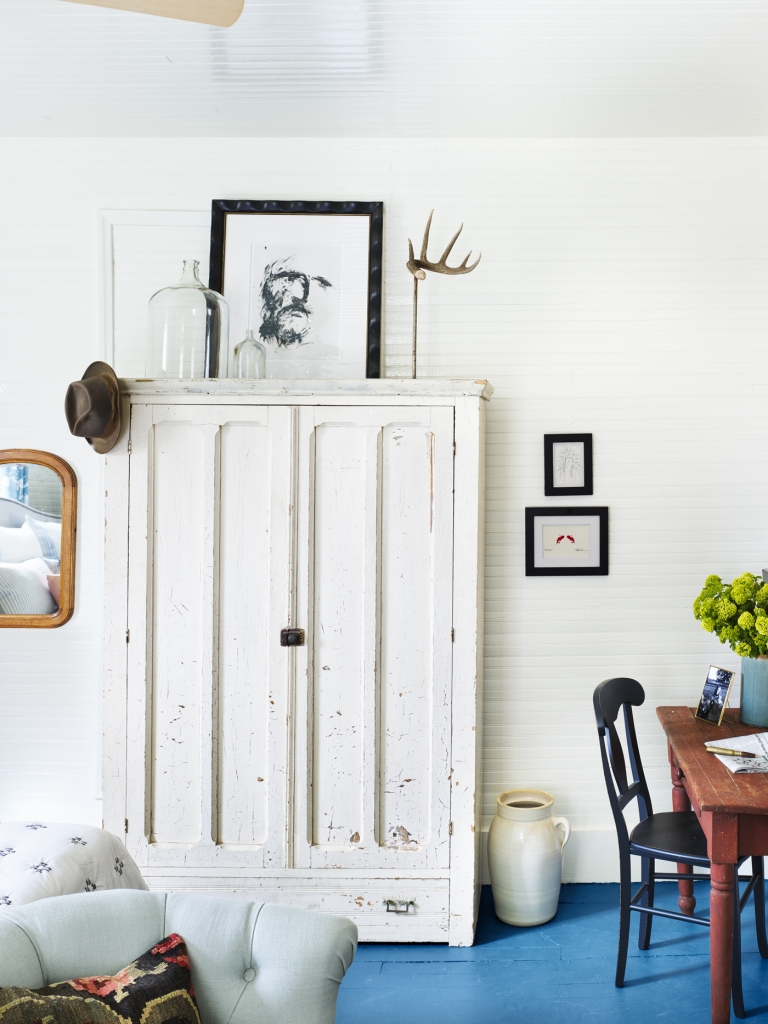 After the original space for clothing was taken over by a pretty writing nook, an antique armoire was placed beside it to act as a makeshift closet. This added to the vintage look already created by the weathered wooden desk. To brighten up the room, the beadboard ceiling and walls were painted a clean, refreshing white. Framed artwork was also placed above and beside the closet to give the bedroom a more personal touch. 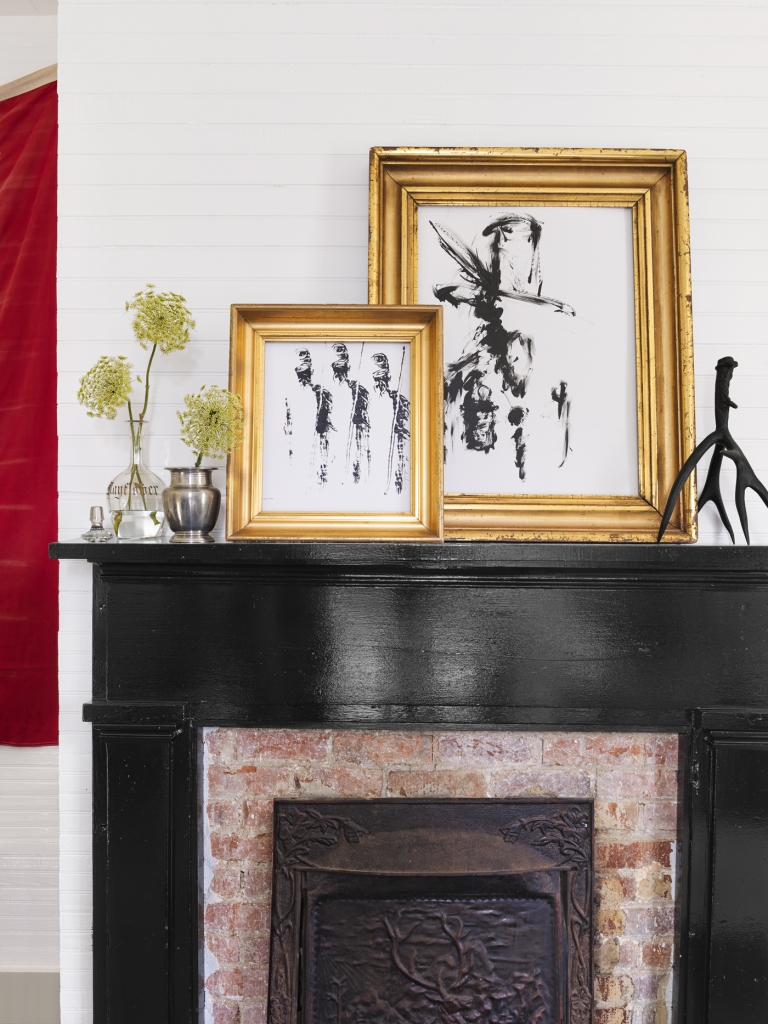 The tired looking fireplace was repainted in an unusual shade of black blue, which appears almost black in concentrated areas, but much bluer when painted on larger surfaces. Continuity is demonstrated throughout the bedroom, with ebony accents adding sophistication to this cozy space. Minimalist paintings similar to the ones near the closet are also on display on the mantelpiece. 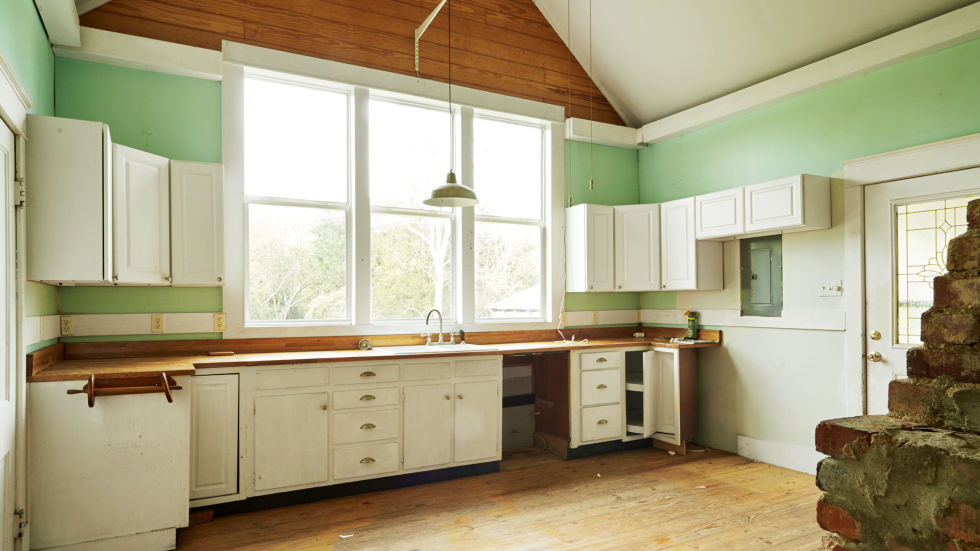 The tatty and outdated kitchen and dining room was begging for a much needed revamp. Shabby hardwood flooring and basic old fashioned cabinets and counters did not do justice to this spacious room. The only redeeming feature, was that a lot of natural light was let in by the large window, which brightened up the kitchen. 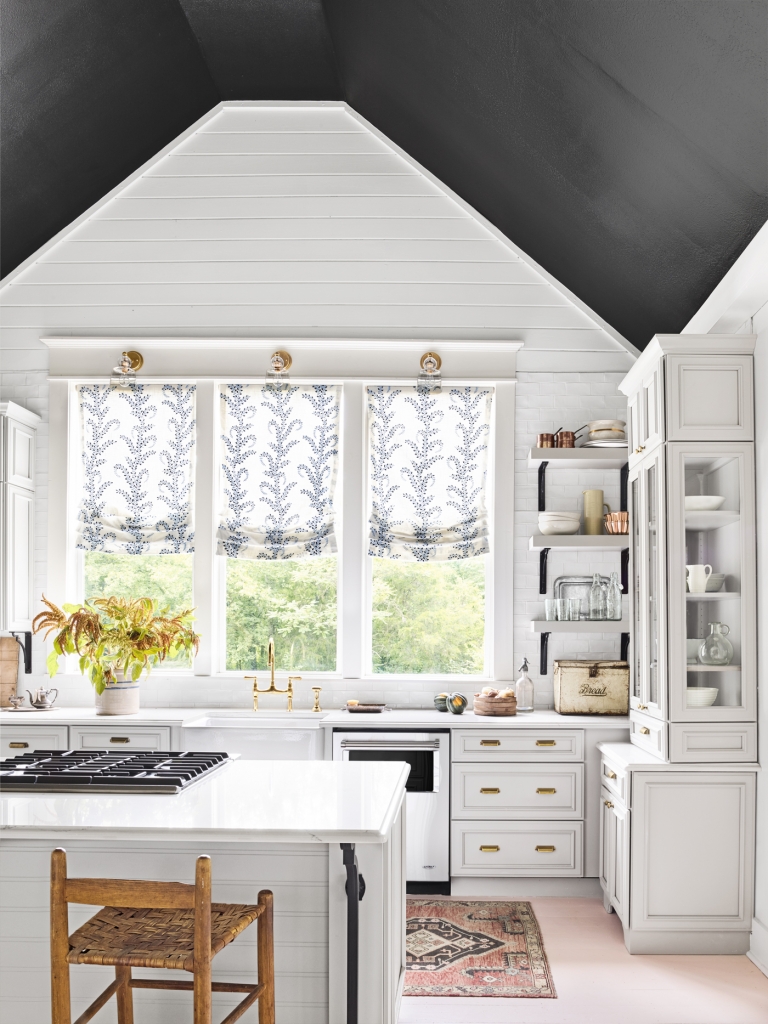 A luscious shade of light pink was painted on the floors to rid the wood of its tatty look. The walls and trim were refreshed with a coat of crisp white paint, while ceramic subway tiles covered the remainder of the bright green walls to add some texture. Patterned roman shades were hung up by the window to bring some color back into the kitchen without being too bright. Subtle light grey cabinets replaced the off color cream ones that were previously in the kitchen, and beautiful quartz countertops were put in place underneath to give the kitchen a touch of elegance. 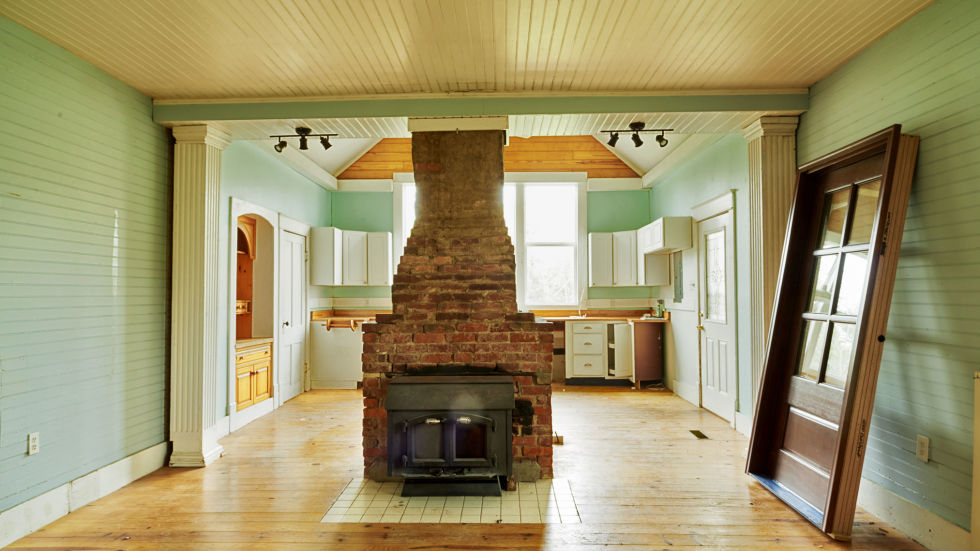 The open plan layout of the kitchen and dining room meant the dining area shared some of the same unattractive design elements as the kitchen. A pastel green covered the beadboard walls and it featured the same shabby flooring. Separating the kitchen from the dining room was a beautiful fireplace that added a homely feel to the large space, and created a good focal point. 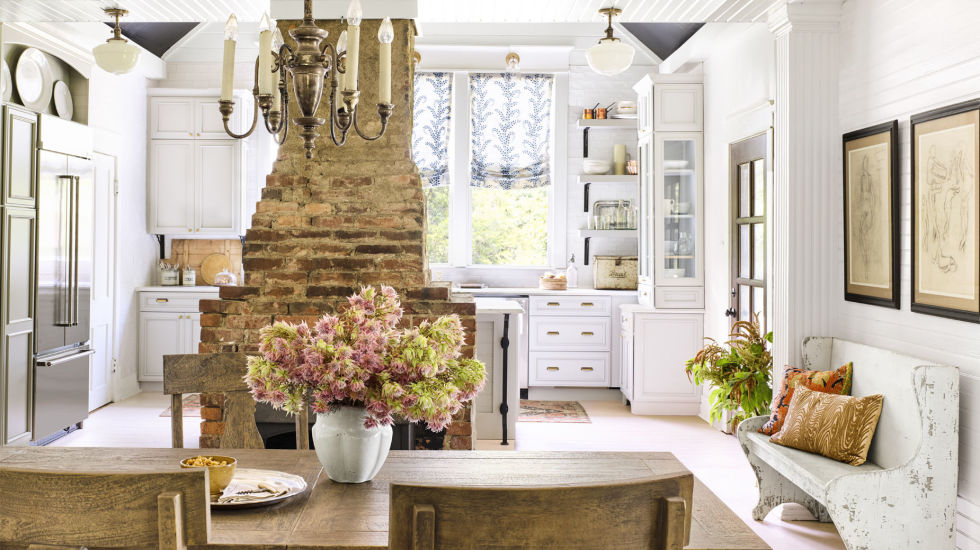 Just like the kitchen, the original beadboard walls were painted the same white, and the hardwood floors were covered in a light coat of pink. The fireplace remained almost untouched, apart from some white and gray concrete tiles added to the hearth. To accentuate the cozy feel created by the presence of the fireplace, a rustic set of table and chairs were placed in the middle of the room. A stylish bench with throw pillows was also added to the side. Additional lighting was placed in the dining room in the form of a tasteful chandelier that complimented the honey hue accents on display. 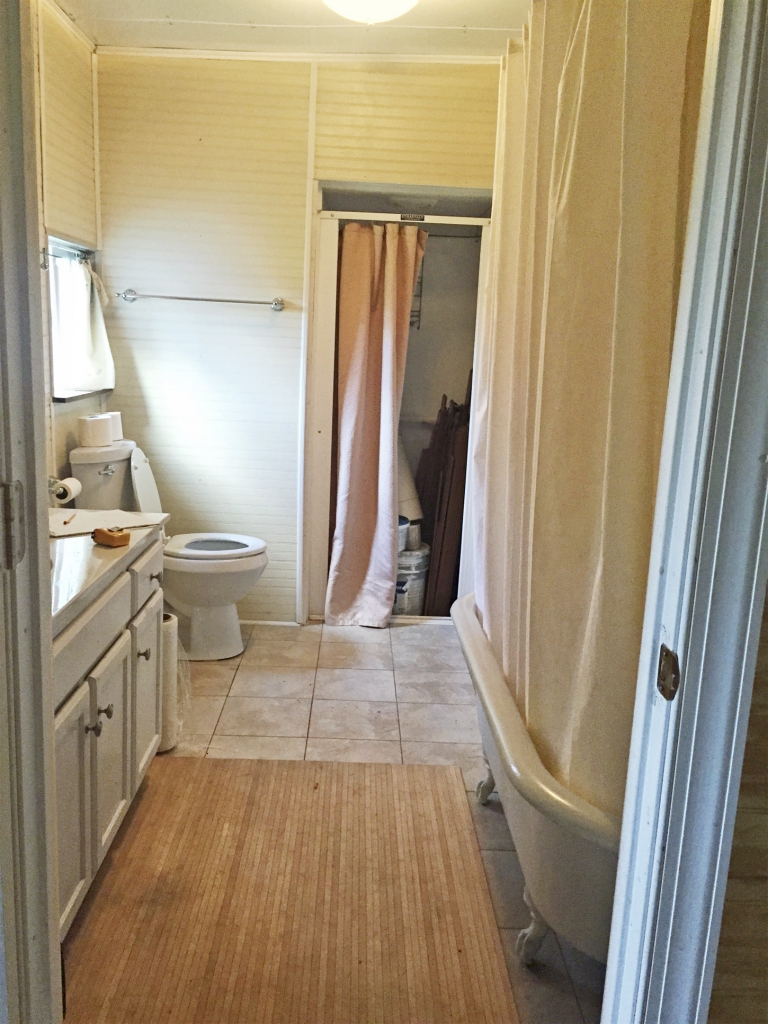 The bland appearance of the bathroom was very off-putting, and everything in the room looked tired and old. Despite the generous size of the room, it looked very cramped, especially the shower at the back of the bathroom. 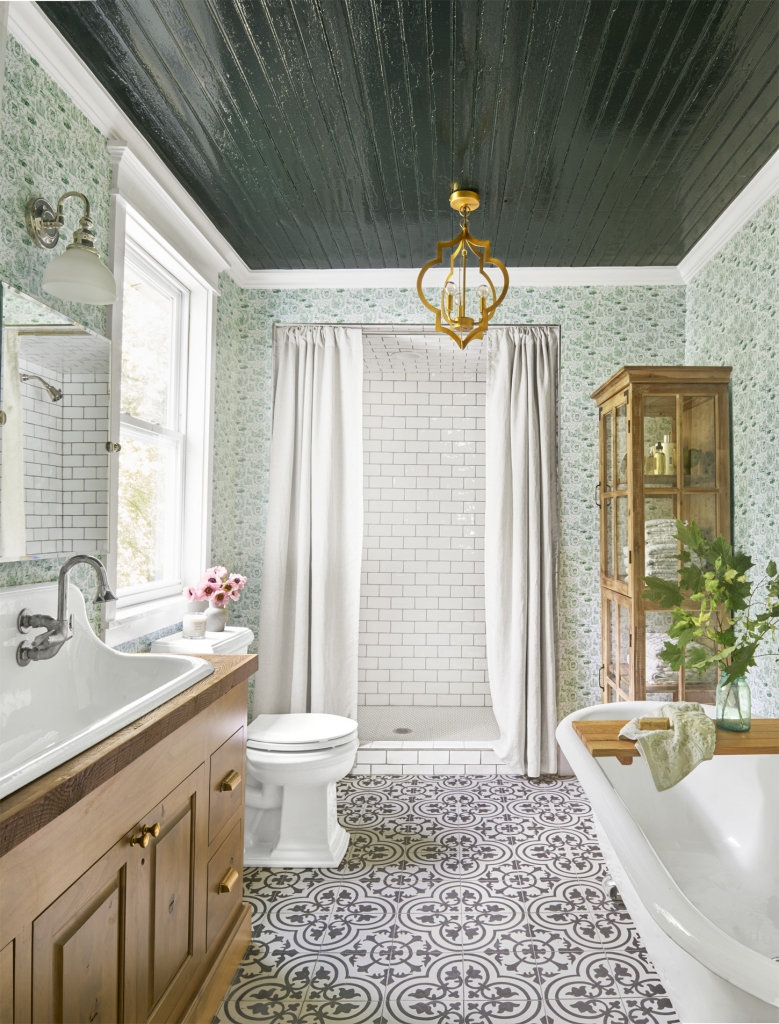 The whole room was given a complete makeover to turn it from drab to fab. A mixture of green and black and white prints were added to the walls and floor to liven up the room and give it personality. New wooden cabinets were put in place to create the ideal base for the sink and faucets. To compliment the soft hue of the wooden, a curio cabinet of a similar shade was placed at the side of the wall to display and hold the bathroom towels. One of the biggest renovations to the bathroom was the shower, as it was elongated so it was no longer cramped in the corner. It was also refreshed with a clean white tile design. 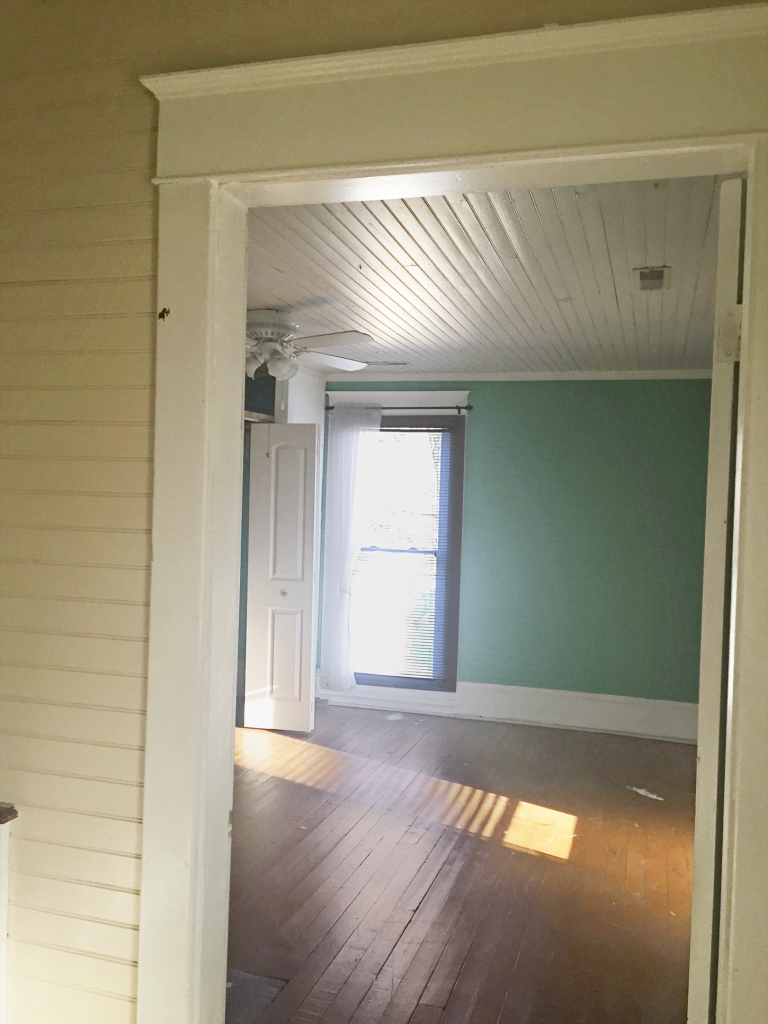 The second bedroom in the house featured dated green paint, and an unclean shade of white on the ceiling and border of the walls. There was also a very awkwardly placed dividing wall which separated the bedroom into two segments. 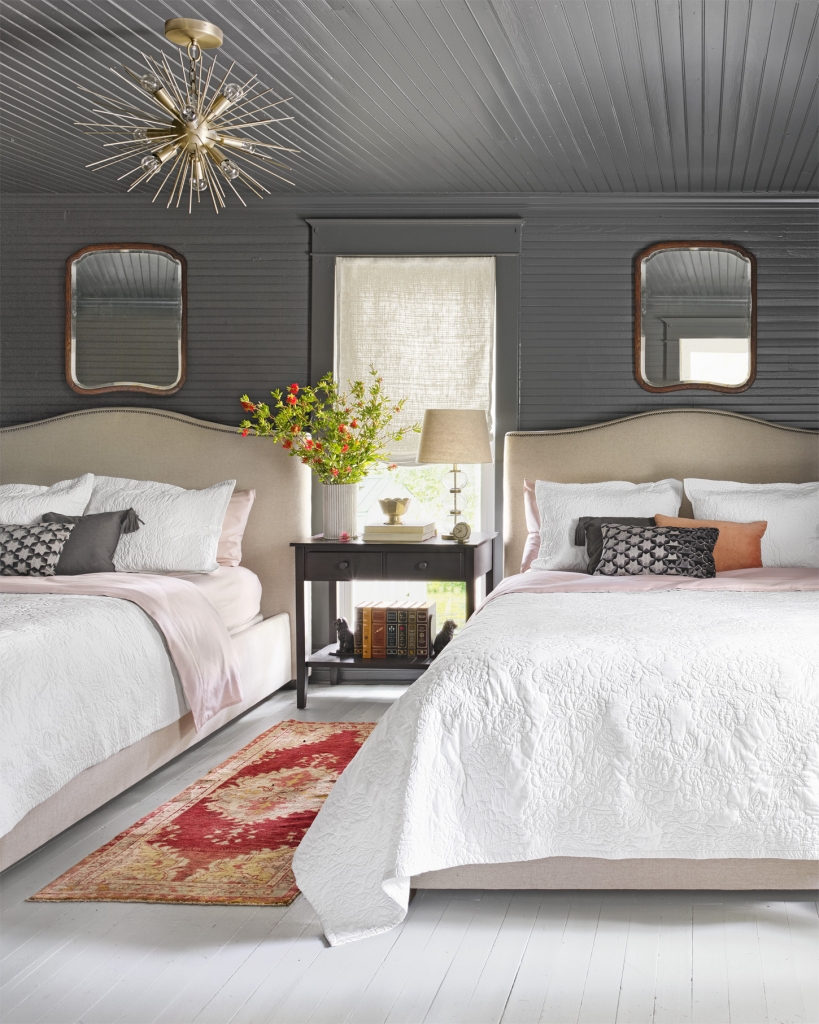 The first thing to go in the bedroom was the dividing wall. As soon as that was taken down there was much more space to work with. A strong dark shade of paint was applied to the walls to unite the divided room. To make the furniture and other features of the room stand out, the ceiling was also painted the same color as the walls. Two beds were covered in matching white bedding to create symmetry in the room and compliment the white painted flooring. A small rug featuring warming tones of red and gold was placed between the beds to add a hint of color. To make the room more modern, a starburst chandelier was installed and a wide nightstand holding a stacked glass table lamp was positioned in the middle of the beds. 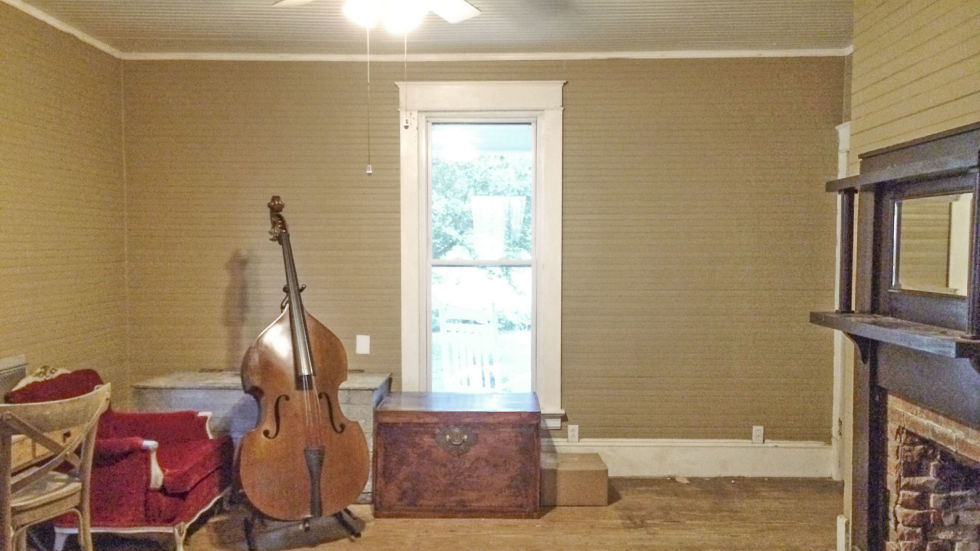 Just like the other beadboard walls in the rest of the house, they needed refreshing with a lick of paint. The overall beige tone made the living room look bland and boring, rather than a welcoming family room. It was also filled with clutter that looked out of place such as a red velvet chair. 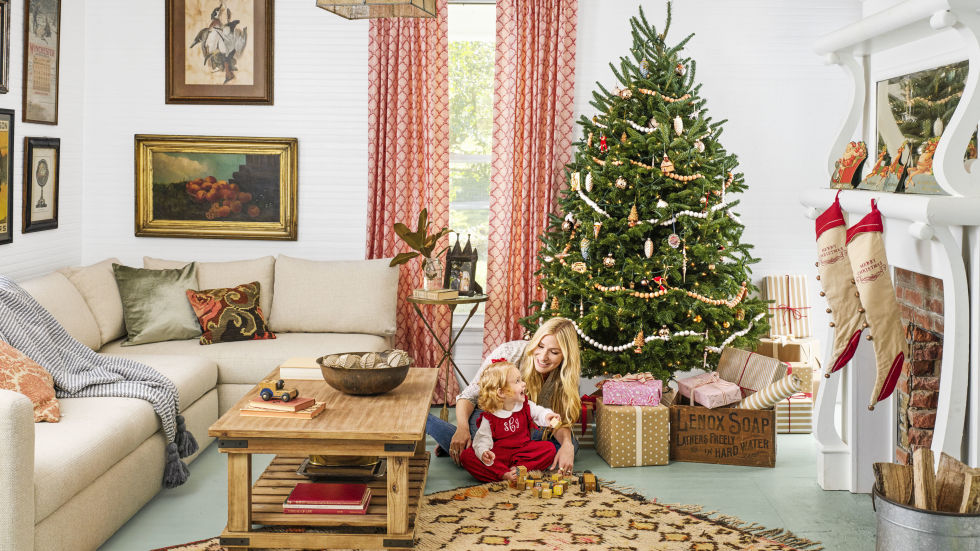 Continuity is key in this house, so the beadboard walls were painted with the same white that was used in the entryway. To coordinate with the walls, the mantelpiece was also replaced with a freshly painted white version. A soft blue was painted on the floors to provide the room with color, while the rest of the room was decorated in relaxing neutral colors with a beige sofa and wooden coffee table. A pretty patterned rug was then placed in the center of the room which ties in with the color of the furniture, while blush colored draperies were hung over the window. 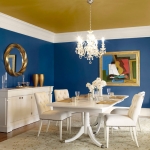 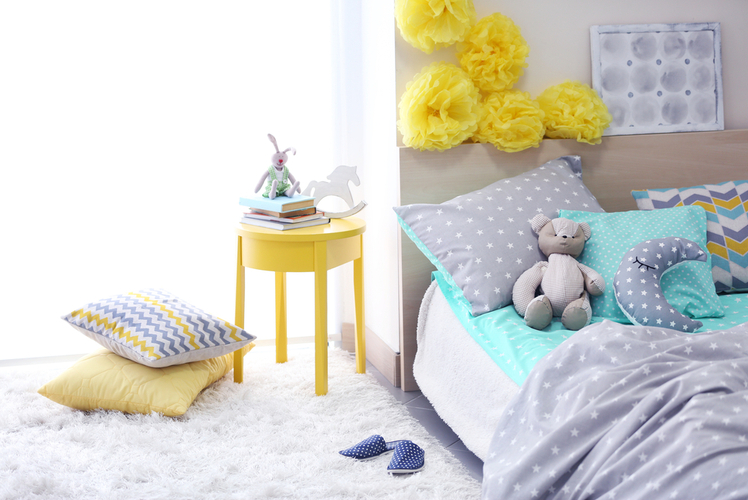